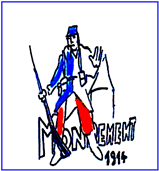 In Champagne, near Mondement in the south part of the Marne departement, stand the national monument which comemorates the first Marne battle that took place during world war one. The french parlement decided to have this gigantic milestone (more that a hundred feet high) built shortly after the end of world war one. This monument stand for the courage, the suffering and the sacrifice of soldiers who fought the battle of the Marne.

On the french side the general Joffre was the strategic commander of these combats : for the first time he was in command of a huge army in which 'out of the conscription' soldiers knew how to read, write, and had received a military and a civic education.

General Von Molkte was in command of the german army but he was taking orders from the Kaiser.

The battle took place between the 5th and the 12th of september 1914, from Senlis to Verdun on a 300 Km warfront. This was the bloodiest week of the war. In the south part of the marne departement numerous assaults and fights have taken place in villages such as Esternay, Montmirail, Sezanne...

Mondement's castle retaking was the turn of the battle.

This battle stopped the german invasion and the counter attack ended on the 14th of september. Then a line of trenches was drawn from Belgium to Swizerland. This line was the warfront for 4 years

Mondement 1914 association is in charge of the national monument which belongs to the departement of Marne. In 1996 the association opened a museum in Mondement old school. The purpose is to welcome kids so that they can learn from the past facts for a better understanding of the present.

After all these wars the french-german pact was signed in 1963 by cancelor Adenauer and General De Gaulle. It was a major step in the european construction and as to preserve and improve this construction we consider our association as to be part of this process.